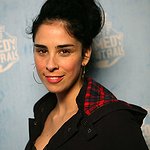 Sarah Silverman may be known for her cutting humor, but when it comes to animal abuse, she’s not joking around. The comedian has sent a deadly serious letter on PETA's behalf to the U.S. Department of Agriculture (USDA) calling on the government to remove four ailing elephants— including a fellow Sara—from the Ringling Bros. and Barnum & Bailey Circus.

In the letter, Silverman explains that recent veterinary evidence shows that the elephants are being forced to perform grueling tricks despite suffering from lameness and, in two cases, arthritis—the number one reason for euthanasia in captive elephants.

“I am writing to urge you to immediately seize four ailing elephants traveling with the Ringling Bros. circus,” Sarah wrote. "My friends at PETA have expert veterinary evidence showing that Nicole, Karen, Juliette, and Sara are being forced to perform grueling tricks despite suffering from lameness, and, in the cases of Nicole and Karen, arthritis as well. Arthritis is the number one reason for euthanasia in captive elephants, and veterinarians have cautioned that if their situation is not improved, Juliette and Sara will suffer life-threatening arthritis just as Karen and Nicole do.

“PETA first reported this evidence to the U.S. Department of Agriculture more than nine months ago and has been told that the case is being investigated. But these suffering elephants remain on the road with the circus, where they are chained on hard surfaces for many hours and even days at a time and have been forced hundreds of times to perform tricks that aggravate their condition.

“Performing circus tricks is a painful struggle for these animals. Yet Ringling’s elephant handlers—who have zero vet experience—continually stab the animals with sharp metal rods called “bullhooks” in order to keep them performing despite their ailments. To cover up bloody wounds from these bullhooks, Ringling buys a gray powdery makeup called “Wonder Dust.”

“As you can see in this Washington Post exposé, life for elephants at Ringling is hell from the moment they’re born at the circus’s breeding center. Baby elephants are prematurely torn away from their mothers, tied up, slammed to the ground, beaten, and shocked with electric prods until they learn to stand on their heads and perform other stunts that these highly intelligent, sophisticated animals would never do in nature.

“Won’t you please enforce the Animal Welfare Act and immediately remove these lame and arthritic elephants from Ringling before they are forced to suffer further?”

Silverman, a longtime vegetarian, joins other celebrities including Demi Moore, Kyra Sedgwick, Darren Aronofsky and Olivia Munn, who have teamed up with PETA to protest Ringling Bros. For more information, visit PETA.org or click here.