Hollywood stars and fashionistas attended the (BELVEDERE)RED sales launch party at The Box during the weekend.

The one night only event also saw MTV star Audrina Patridge, socialite Lindsay Lohan, actor Jesse Metcalfe, and Dancing with Stars choreographer Derek Hough toast the weekend with (BELVEDERE)RED cocktails which included Belvedere Breeze, Belvedere Heat, and Belvedere Gimlet. All guests enjoyed an evening of entertainment featuring the best of The Box performers from all over the world, providing a ‘magic hat’ of entertainment. 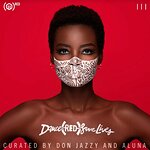