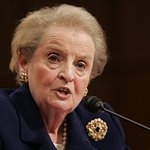 Celebrities spanning the worlds of politics, sports and entertainment have joined together for The Robert F. Kennedy Center's annual Ripple of Hope Holiday Auction.

“Through our annual auction, human rights advocates and pop culture fans around the world have a unique chance to bid on incredible gifts that give back with some of the world’s most notable figures,” said Kerry Kennedy, President of the RFK Center. “Bidders support the RFK Center’s work aiding courageous human rights defenders around the world, including Frank Mugishha in Uganda, Abel Barrera Hernández in Mexico, Magodonga Mahlangu in Zimbabwe, and many more. Additionally, funds raised will help expand the Center’s Speak Truth to Power program, a multi-faceted global initiative that uses the experiences of courageous defenders from around the world to educate students and others about human rights, and urge them to take action.”

“Charitybuzz is proud to be the official charity auction partner for the RFK Center’s annual Holiday Auction for the 5th year in a row, working hand in hand with the organization to raise funds for their incredible work aiding human rights defenders,” said Coppy Holzman, CEO and co-founder of charitybuzz. “This holiday season, we encourage our socially conscious community to make a bid to give.”