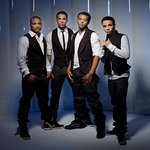 Directed by Ben Winston, who directed and co-wrote the infamous Smithy sketches for Comic Relief, the video sees JLS performing in an empty Wembley Stadium as the stories of three gifted children unfold. One young boy displays a remarkable talent for leaping; another impresses with his acrobatic break dancing abilities; and a young girl dances triumphantly in the rain as others run for cover.

As Adlington, Idowu and Smith emerge into Wembley Stadium at the end of the video, it is clear that the stories that have unfolded are those of these great British athletes. Everything they have done in their lives, sometimes without even knowing it, has been part of their journey to strive for greatness. As the athletes carry the Union Jack it is clear that they, too, want to make their country Proud. Watch the video here.

JLS will also be celebrating the UK’s biggest year of sport by taking part in the Sainsbury’s Sport Relief Mile on Sunday 25th March. A whole host of famous faces from the world of sport and entertainment will also be taking part in the Mile including Olly Murs, Lorraine Kelly, Kara Tointon and James Cracknell among many others. The public can go the extra mile too by entering online at www.sportrelief.com/mile.

Proud will be available to download on 18th March and in stores from 19th March and money raised from the single and Sport Relief will be spent helping some of the most vulnerable people in the UK and across the world’s poorest countries.

Aston from JLS said: ’We’re so excited to be part of Sport Relief 2012 and to have the official single is a massive honour for us. Filming at Wembley Stadium was absolutely incredible and we’re the first artist to film a music video there. When I was younger I dreamed about playing in a World Cup final at Wembley but this was just as good! Having been to Uganda to see some of the work that Sport Relief supports we’re really proud to be part of a campaign that changes so many lives, so we hope the single raises a huge sum of money."

Rebecca Adlington said: “It was such an honour to be part of the video with JLS and I think the song is amazing. It was very cool shooting the video in an empty Wembley Stadium – it was really atmospheric and pretty much a once in a lifetime opportunity.”

Phillips Idowu said: “The video shoot was such an inspiring day and it was great to meet the JLS boys. The song really captures what Sport Relief is all about. The kids who play Rebecca, Louis and me in the video are brilliant; they really got the casting spot on!”

Louis Smith said: “I’ve supported Sport Relief for a number of years now so was really happy when I was asked to be part of the JLS video. I’ve seen firsthand how the money raised by the public helps people around the world and here in the UK, so I really hope everyone buys Proud and raises as much money as possible for Sport Relief.”

JLS will be performing Proud on the Sport Relief night of entertainment, which kicks off at 7pm, BBC One on Friday 23rd March. The 2012 BRIT-nominated group will also be performing a special one-off matinee concert for Sport Relief at The O2 on Saturday 24th March and will be joined by Olly Murs and Rizzle Kicks.