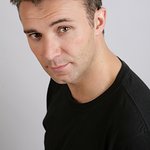 Wilkes has already signed up showbiz pals, Ant & Dec to join him for the day of golf at Foxhills Golf Resort in Surrey, with more high-profile names expected to follow suit.

The event, taking place on Thursday 26th April, follows the news that Wilkes has joined the charity’s list of celebrity ambassadors.

“Caudwell Children is based in my home town of Stoke-on-Trent so I’ve been aware of the fantastic work they do with disabled kids for a long time. I was honoured to be asked to become an official ambassador and I’m now looking forward to getting some mates on to the golf course to help me raise some money for the charity.” said Wilkes.

Famed for his singing and musical theatre acting, Wilkes is also a keen sportsman and has played in the Sky One show ‘The Match’ as well as masterminding the idea for TV’s ‘Soccer Aid’ with childhood friend, Robbie Williams.

“Sport has a unique way of bringing people together so it can used to support worthwhile causes like this. With the help of a few mates I’m sure we can make the day a huge success.” he added.

Jonathan joins the likes of Sir Elton John, Elizabeth Hurley and Peter André as ambassadors of the charity, which provides support for disabled children living in the UK.

Caudwell Children acts as a safety net for families caring for a disabled child. Since 2000 the charity has provided services worth over £17million and helped thousands of children from across the UK.

Trudi Beswick, Chief Executive of Caudwell Children, said: “We were thrilled when Jonathan agreed to host the golf event and become an official ambassador. We’ve known him for a long time and it is fantastic to have the support of someone that obviously cares about charity a great deal.”