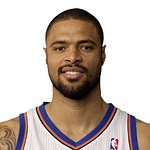 Chandler — the first American NBA player to be named a UNICEF Ambassador — will fundraise, educate and advocate on behalf of vulnerable children around the world.

In his first role as UNICEF Ambassador, Chandler will light the UNICEF Snowflake this Friday on 57th Street and Fifth Avenue in New York City. The lighting ceremony will help raise awareness of areas of the Philippines ravaged by Super Typhoon Haiyan. The latest estimates indicate that as many as four million children could now be affected by the disaster. UNICEF is providing children and families with immediate necessities including food, water, and medicine. Designed by Ingo Maurer and dedicated to UNICEF by The Stonbely Family Foundation in 2002, the Snowflake serves as a beacon of hope and compassion.

Following his gold medal win with the U.S. Olympic Men’s Basketball team at the London Olympics, Chandler travelled to Tanzania with the U.S. Fund for UNICEF. While in Tanzania, Chandler visited UNICEF-supported programs that provide children with life and vocational skills training and health centers for mothers of children with HIV/AIDS.

“Traveling to Africa with UNICEF and seeing kids who don’t have access to an education, or who are living on the streets was a life-changing experience for me,” said Chandler. “I’m incredibly honored to help raise awareness of UNICEF’s work that’s truly making a difference for the lives of children.”

In the U.S., Chandler has served as a strong advocate for the organization, raising awareness of emergency relief efforts and campaigns such as the UNICEF Tap Project to millions of basketball fans. An aspiring photographer, Chandler hosted a photo gallery exhibit in October 2012. Featuring powerful images from his trip to Tanzania, the exhibit generated thousands of dollars for the U.S. Fund for UNICEF. Additionally, Chandler donated the exclusive opportunity to spend a day with him during NY Knicks practice as part of the 2012 UNICEF Snowflake Ball live auction.

“Tyson’s deep commitment to saving and improving the lives of children is evident to those around him,” said Caryl Stern, President and CEO of the U.S. Fund for UNICEF. “We’re excited that he’s using his voice to help shine a light on the issues that children around the world face every day, such as lack of access to clean water or medicine.”

Chandler – who is in his third season with the Knicks after joining the team in 2011 – has quite a few career accomplishments. In 2012 he was selected for the NBA All-Star team and named the Defensive Player of the Year. In 2011 he helped lead the Dallas Mavericks to their NBA championship. Off the court, Chandler, with his wife Kimberly, is devoted to philanthropic efforts. In addition to their work with UNICEF, they launched ‘Rebound 4 Rockaway’ to help those affected by Superstorm Sandy in Far Rockaway, New York.

Chandler joins a roster of celebrities who have supported UNICEF over the years, from Danny Kaye and Audrey Hepburn, to Laurence Fishburne, Selena Gomez, Angie Harmon, Tea Leoni, Lucy Liu, Alyssa Milano, and Sarah Jessica Parker, among others.