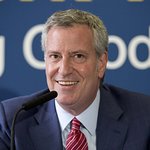 Mayor Bill de Blasio‘s defense of tigers, elephants, and horses forced to work in New York and his promotion of vegan eating in the Big Apple have earned him the title of PETA’s Person of the Year for 2014.

In March, de Blasio became the first mayor to suspend a circus act for not giving legally required space to the tigers and for failing to provide tuberculosis test results for the elephants it carts from town to town. In September, he unveiled a skyline carved from vegetables to announce PETA’s recognition of New York as the most vegan-friendly city in the U.S., sparking worldwide buzz about healthy, humane eating. And in December, despite noisy opposition, de Blasio fulfilled his promise to introduce a bill to retire the horses used for carriage rides from dangerous traffic to peaceful sanctuaries while helping the drivers find other work. The mayor’s award from PETA is an engraved horse sculpture.