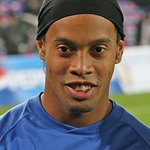 Ronaldinho, one of the game’s greatest ever players, has become the latest star signing for the tenth anniversary of Soccer Aid.

The Brazilian legend will form part of 2015/2016 Premier League winning manager Claudio Ranieri’s Rest of the World squad as they take on Jose Mourinho and Sam Allardyce’s England.

The two star-studded teams will once again go head to head in what promises to be another electrifying match on Sunday 5th June, broadcast live on ITV from Manchester United's legendary Old Trafford Stadium, all in aid of UNICEF, the world’s leading children’s organisation.

World cup winner, Ronaldinho, who has twice been named FIFA footballer of the year says: “I am going to play for the Rest of the World team at Soccer Aid. I’m delighted to be supporting Unicef and the vital work they do and can’t wait for Sunday 5th June. It’s so nice to participate in such an important match and a great opportunity to show the strength of this sport. I am very happy to meet my brother Cafu and other friends for this important cause.”

He joins the Rest of the World squad which includes his fellow former Brazilian teammate Cafu, Manchester United favourites Jaap Stam and Dimitar Berbatov, Dutch midfield dynamo Edgar Davids, former Barcelona and Cameroon international striker Samuel Eto’o plus Germany and Arsenal goalkeeper Jens Lehmann – who will all be looking to make it two Soccer Aid wins in a row for Rest of the World.

In the commentary box will be broadcasting icons Clive Tyldesley and Chris Kamara with Howard Webb officiating in the middle.

The tenth anniversary match promises to be bigger, better and bolder than ever before, as the world’s biggest stars from sport, music, television and film play in an action-packed game to raise money and vital support for Unicef’s work for children in danger.

The money raised through profits from ticket sales will add to the incredible £17 million that has already been raised for Unicef to help provide children with life-saving food, vaccines, and clean water, as well as protecting them from violence, exploitation and abuse. 100% of all public donations will go towards supporting the vital work of Unicef.

The biennial live event will be hosted by Soccer Aid veteran Dermot O'Leary with TV presenter Kirsty Gallacher once again pitch side to report on all the action as it happens.