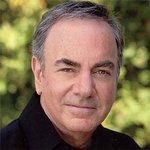 Neil Diamond will be honored as MusiCares Person Of The Year later tonight – Friday, February 6 – in a concert celebrating his music and humanitarian spirit.

Heading up the list of performers set to join the music legend on stage at the Los Angeles Convention Centre are Kid Rock and British band Coldplay. Also on the agenda are the Foo Fighters, Jennifer Hudson, Jonas Brothers, Josh Groban and Faith Hill.

“It’s a double-whammy,” Diamond joked to the Associated Press. “I get a chance to help raise a lot of money and a little plaque that says, ‘Hey, you’re OK.’”

Diamond is being honored for his charity work, which includes his recent donations to victims of Hurricane Ike.

Proceeds from the concert will go to MusiCares, an organization that provides a safety net of critical assistance for music people in times of need by supplying services and resources that cover a wide range of financial, medical and personal emergencies. The evening will also feature a fantastic silent auction.