Hilary Duff Dishes It Out at Homeless Shelter

By Elizabeth Willoughby on August 6, 2007 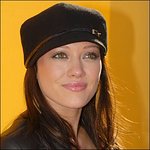 Singer Hilary Duff served up chicken and stew for hundreds of homeless and working poor men last week at Hope Mission's Herb Jamieson Center, a shelter in downtown Edmonton, Alberta. She stopped by the Center as part of her campaign to raise awareness about poverty and hunger.

“It’s nice when someone who makes a lot of money will look you in the eye and treat you like a real person,” Hope Mission spokeswoman Janelle Aker said, adding that Duff’s efforts could also help raise awareness with a younger demographic.

The pop star was in town as part of the Canadian leg of her North American Dignity tour, which kicked off last weekend. Duff is once again asking concert-goers to bring along non-perishable food donations to be collected at concert gates by The Salvation Army and distributed by food charity Harvest. Harvest chapters “collect surplus food from restaurants, grocery stores, and other food producers and immediately deliver it to missions, shelters, soup kitchens and food banks.” During her previous two Canadian tours, Duff raised over 125,000 pounds for Alberta Harvest. Harvest founder Stan Curtis says each concert can bring in as many as 3,000 cans of food, enough for 6,000 meals.

Last November Duff bought 200,000 meals through USA Harvest for Hurricane Katrina refugees still in shelters over a year after the disaster. Curtis says, “Hilary has set an extraordinary example with her generous contributions to the Gulf Coast victims of (the) tragic hurricanes. With her current contribution, Hilary will have donated over 2.7 million meals to the victims who still need these generous donations.”

Even so, Duff says, “A big misconception of charity work and celebrities is that it takes a lot of money. It doesn’t take a lot of money. Your time is the best thing you can give.” She feels that with compassion, homelessness and hunger are simple to solve.

Duff plans to meet with fans before her August 25 concert in Louisville, Kentucky, and is asking her fans to help her raise 1,000 cans of food at the event.