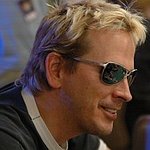 Look To The Stars reporter Delinda Lombardo recently attended the star-studded World Poker Tour Invitational in Los Angeles and caught up with some of the celebrities involved.

On March 1-3, celebrities and poker professionals hit the felt for the 6th Annual World Poker Tour Invitational at Commerce Casino in Los Angeles. More than 100 celebrities were invited to compete for a seat in the WPT Championships while raising money for charity, including a side pot worth nearly $30,000 that went entirely to charity in the names of the final 13 celebrities in the field. The three title charities of the event, guaranteed to receive at least $2,500 each, were Soles United, Susan G. Komen for the Cure, and Harbor Private Funds.

Actor James Woods has already established himself as one of the ‘best celebrity’ poker players out there. After losing his brother to a stroke in 2006, it came as no surprise that he plays for the American Stroke Association.

“I’m playing for my brother,” he told me.

Lakers owner Jerry Buss was also playing cards, but it was Lakers forward Ronnie Turiaf who came out a winner. Turiaf has been coping with a heart aliment that didn’t seem to stop him from making the best of it.

“I’m feeling good,” he said. “You know, things happen for a reason, and I just try to make the best of it. God tests us all in different ways.”

And part of this ‘test’ includes corroboration with NBA player/poet/humanitarian Etan Thomas. Thomas recently underwent open-heart surgery. When I asked Turiaf what charity he was playing for, he dropped the bomb on me:

“Right now, I’m working on putting together something with Etan Thomas so we can help others going through the same thing,” he said. “Etan and I talked about it when I went to Washington, my part is going to be here and his part will probably be in Washington. We’re hoping to have it established later this year.”

The name of his foundation – Heart to Heart.

“You know, heart to heart,” he said with his hand over his heart. “As in my heart and his heart, and our hearts reaching out to others.”

Another celebrity taking the time to discuss his charitable efforts was actor Nicholas Gonzalez (Undressed). Gonzalez plays poker on a regular basis, but was much more interested in promoting his charity than his poker skills. Gonzalez was playing for Friends of El Faro, an organization that helps needy kids and families in Tijuana, with celebrities making routine visits across the border into Mexico. When asked about his role, he was quick to take the attention off himself.

“You know, it’s a great cause that I’ve been working with for a while,” he said. "One of the biggest proponents of El Faro is Molly Sims, who has a contract with Cover Girl. They even supported her work, went down there and talked to the younger girls, made up their faces and took pictures. Also Shannon Elizabeth, Adam Rodriguez, and especially Sharon Lawrence, who has been a really huge supporter – there’s a lot of celebrity friends. We used to have big gala every year in Hollywood that’s very well attended, but really, like I said it’s about getting down there, it’s not about who anybody is, it’s about spending time with the kids. We do everything from build playgrounds, to rebuilding kitchens, to knocking down walls – that kind of thing. "

Also on the red carpet was actor Justin Henry (The Junior Defenders), sitting in for actor Heath Ledger, who recently passed away. When asked about his charity, Henry simply stated “I’m playing for Heath.”

Numb3rs actor Will Wheaton walked the Red Carpet while commenting on his Curious George doll, “My son gave it to me for good luck.”

Actor John Hawkes (American Gangster, Deadwood) was knocked out of the poker tournament early on, so I spent some time chatting with him about his charity efforts. Had he not been eliminated, his winnings were earmarked to help save a few animals.

“I love animals,” he said. “So I would have given it all to support Friends of Animals in Utah, they do really great work and are a worthwhile cause that really I believe in.”

Hawkes in also involved with the 1-Second Film Project, a non-profit collaborative film that anyone can be part of. Hawkes is listed as one of the celebrity producers, along with Brett Ratner, Spike Jonez, and Kiefer Sutherland, who are raising money while creating the Worlds Biggest Short Film. All profits raised by the finished film will be donated to the Global Fund for Women.

Tom Everett Scott (Cashmere Mafia, Saved) was playing for a cause close to his heart.

“I’m playing for autism” he said prior to the tournament. “It runs in my family so it’s really important for me to personally get involved.”

Brian Baumgartner (The Office) was there to help raise money for those writers who were affected by the writers strike.

“I’m playing for the Motion Picture and Television Fund for the below the line workers that were affected by the writers strike,” he commented. “Its really an important organization that does a great deal of good work.”

Other celebrities in attendance included Mimi Rogers, who was playing for the Dream Foundation, actor Dwayne Adway (Into the Blue_), who was very proud to support the Creative Coalition, and James Kyson Lee (_Heroes) who has been inspired to start his own foundation.

“I’m just getting it established” Lee happily stated. “Im really excited about being able to help others and give back, I’d like to help the children in some way.”

Congratulations to the winner of the event, Van Nguyen, who became the first female in history to win a mixed WPT tournament. She is married to poker pro Men ’The Master" Nguyen.