Another exciting Tiger Jam culminated on Saturday night as John Mayer and Keith Urban took the stage at the Mandalay Bay Events Center in Las Vegas for a sensational concert which helped raise approximately $750,000 for programs of the Tiger Woods Foundation.

The 2011 Tiger Jam once again provided a VIP weekend for guests, including an exclusive clinic and Q&A with Tiger Woods, John Cook and surprise guest Darius Rucker; an evening reception; live and silent auctions featuring one-of-a-kind luxury items; and a rocking concert from GRAMMY Award-winners Urban and Mayer. Joining Tiger Woods onstage at the reception was Tamika Mitchell — a third-year Earl Woods Scholar — who spoke of her experience with the Tiger Woods Foundation and shared her story of achievement.

“The support I receive from the Tiger Woods Foundation has assisted me in the journey and is helping me achieve my dreams,” Mitchell said. “Now, I see myself having an exciting and limitless future.”

After an opening set from Tyler Hilton, event host Tiger Woods took to the stage at the Mandalay Bay Events Center to welcome everyone to the 2011 Tiger Jam. Near the end of Mayer’s set, Urban joined him onstage for a surprise performance of “Cripple Creek.” Immediately following, Urban hyped up the crowd as he performed his hit songs for more than 6,200 people.

Prior to the concert, VIP guests attended the Tiger Jam reception, sipping on signature GREY GOOSE Vodka cocktails and delicious hors d’oeuvres while listening to remarks from president and CEO of the Tiger Woods Foundation — Greg McLaughlin — along with Mitchell and Woods. Saturday night’s festivities also included exciting live and silent auctions, which featured luxury golf packages such as a once-in-a-lifetime trip to London for The Open Championship that went for $12,500. Other notable auction items included a backstage meet-and-greet with Woods, Mayer and Urban that went to three lucky groups for a total of $80,000; a meet-and-greet with country superstar Carrie Underwood at a future concert which sold for $1,400; a TAG Heuer Aquaracer Automatic Chronograph 500 M watch went to one lucky buyer for $3,200; and a unique package which gave 20 guests access to Rob Dyrdek’s Fantasy Factory went for $10,000. The auction items were donated by many generous companies and individuals, including American Airlines, Mario Batali, TAG Heuer, Rob Dyrdek, Mandalay Bay, Mercedes-Benz USA and Upper Deck.

Following the concert, the party continued at the House of Blues, where guests mingled with host M.C. Hammer while enjoying late-night breakfast nosh and Wilson Creek champagne. 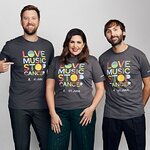