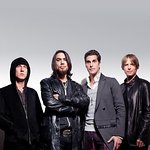 Tovar will present Vans Warped Tour founder Kevin Lyman with MusiCares’ From The Heart Award for his unconditional friendship and dedication to the mission and goals of the organization. Tyler will present Depeche Mode lead singer Dave Gahan with the Stevie Ray Vaughan Award for his dedication and support of the MusiCares MAP Fund, and for his commitment to helping other addicts with the addiction recovery process.

All proceeds from the benefit will support the MusiCares MAP Fund, which provides members of the music community access to addiction recovery treatment regardless of their financial situation.