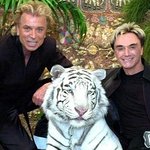 Illusionist team Siegfried & Roy's long awaited return to the stage has finally been scheduled, and will be their first performance since Roy was mauled by a tiger in 2003. The one-night only show, next February at the Keep Memory Alive (KMA) foundation’s “Power of Love” gala, will benefit the Lou Ruvo Brain Institute (LRBI) in Las Vegas.

Under construction since last year, the Institute will aim to provide the most current research and scientific information for the prevention, early detection, treatment, education, and support of memory disorders and neurodegenerative dementia diseases. LRBI plans to “house the world’s most powerful brain doctors”, and predicts that the cure for Alzheimer’s, Parkinson’s, Huntington’s, and Lou Gehrig’s disease will be discovered there.

“[We] are simply overwhelmed by the outpouring of support for the institute,” said Ruvo. “There are no words to express our deep gratitude for the generosity shown. It only deepens our resolve to build an institute that… the medical world will recognize as one of the finest of its kind.”

Nearly five years after the accident, despite still undergoing daily physiotherapy, Roy feels ready for the stage again and to support LRBI in a big way. Siegfried didn’t at first, as he told the Las Vegas Review Journal in December: “I was really not ready for it. All the doctors say what [Roy is] doing now is impossible.”

The tiger that dragged Roy by his neck, causing extensive blood loss and damage, was actually attempting to get him to safety after a fall. Unbeknownst to the animal, humans have substantially thinner hides than tigers.

“I’ve always said, ‘I am the magician and Roy is the magic,’” said Siegfried. “And Roy shows me every day the magic – the magic of life.”

The Lou Ruvo Brain Institute is expected to be finished next year.

Leeza Gibbons Interview with Give Back Hollywood