A descendant of pre-Civil War era American slaves, Ali grew up in the segregated South, where he experienced prejudice and discrimination firsthand. Upon returning to the United States after winning an Olympic Gold Medal in Rome in 1960, he was turned away from a “whites-only” restaurant.

In 1967, Ali refused induction into the U.S. Armed Forces due to his religious beliefs. As a result, he was arrested, fined, stripped of his boxing license and title, and found guilty of draft evasion. Though Ali was prepared to pay the price for his convictions, the Supreme Court reversed the decision in 1971, ruling that his refusal stemmed from his constitutionally protected religious beliefs. Ali regained his title in 1974 and retired from the ring in 1981.

He has since devoted his life to helping promote world peace, civil rights, cross-cultural understanding, interfaith relations, humanitarianism, hunger relief, and the commonality of basic human values. His work as an ambassador for peace began in 1985, when he flew to Lebanon to secure the release of four hostages. Ali also has made goodwill missions to Afghanistan and North Korea; delivered over $1 million in medical aid to Cuba; traveled to Iraq to secure the release of 15 United States hostages during the first Gulf War; and journeyed to South Africa to meet Nelson Mandela upon his release from prison. His recent attempt to free two American hikers held captive in Iran reinforces his tireless commitment to promoting freedom, tolerance, and humanity around the world.

Throughout his boxing career, Ali’s highly publicized fights in locales such as Kinshasa, Manila, and Kuala Lumpur brought increased global attention to the developing world. Today, he continues to serve those in need overseas, providing over 232 million meals to the world’s hungry. Ali has hand-delivered food and medical supplies to children in Cote D’Ivoire, Indonesia, Mexico, and Morocco, among other countries.

In addition to his international efforts, Ali is equally devoted to helping charities at home. He has visited countless numbers of soup kitchens and hospitals, and helped organizations including the Make-A-Wish Foundation and the Special Olympics. He also annually participates in Celebrity Fight Night, which generates funds for the Muhammad Ali Parkinson Center at Barrow Neurological Institute in Phoenix, Arizona.

Ali once said, “I’ve always wanted to be more than just a boxer. More than just the three-time heavyweight champion. I wanted to use my fame, and this face that everyone knows so well, to help uplift and inspire people around the world.”

In November 2005, Ali and his wife Lonnie opened the Muhammad Ali Center in their hometown of Louisville, Kentucky. Both an education center and museum experience, the Ali Center inspires children and adults to be as great as they can be, and encourages people around the globe to form new commitments in their lives in areas of personal growth, integrity, and respect for others.

Muhammad Ali has received some of the world’s most prestigious awards. He has been honored by Amnesty International with their “Lifetime Achievement Award.” Kofi Annan, Secretary-General of the United Nations and former Liberty Medal recipient, bestowed him with a citation as “United Nations Messenger of Peace.” Ali also was named the “International Ambassador of Jubilee 2000,” a global organization dedicated to relieving debt in developing nations. In 2005, he was presented with the Presidential Citizens Medal and awarded the Presidential Medal of Freedom.

Copyright © 2020 Look to the Stars, All rights reserved.

Muhammad Ali has passed away, but we remember his charity work.

Muhammad Ali has supported the following charities listed on this site:

Google trends for "Muhammad Ali"
Available to Insiders only
Get Insider Access to these insights & more... 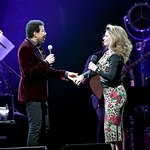 Race to Erase MS announced today that its historic 25th Anniversary Gala will take place on Friday, April 20 at The Beverly Hilton in Los Angeles, and will be hosted by HQ Trivia’s Scott Rogowsky. More →
More news about Muhammad Ali →