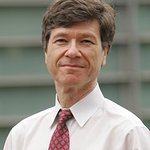 Grammy-winner John Legend presented an award to Jeffrey Sachs. Sachs’ book, The End Of Poverty was a catalyst in Legend’s forming of the Show Me Campaign. American Idol’s Melinda Doolittle presented an award to Peter Chernin, and performed “Amazing Grace” as part of the evening’s entertainment. Ann Veneman, the Executive Director of UNICEF, and Dr. Ngozi Okonjo-Iweala, Managing Director of the World Bank, presented awards to Ray Chambers and George Soros, respectively.

Millennium Promise is on a mission to end extreme poverty by 2025. They have begun by taking steps to achieve the eight globally-endorsed Millennium Development Goals (MDGs) in Africa by 2015.

Malaria No More is actively taking steps to end deaths due to malaria, by providing bed nets and raising awareness about this disease, which kills 3,000 children every day.

For more information on how you can get involved, visit the Millennium Promise and Malaria No More websites.