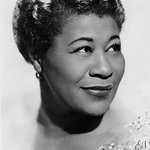 Dubbed “The First Lady of Song,” Ella Fitzgerald (1917-1996) was the most popular female jazz singer in the United States for more than half a century. In her lifetime, she sold more than 40 million albums and received most every honor a performer could dream of winning, including the Kennedy Center Honor (1979), the National Medal of Arts (1987), France’s Commander of Arts and Letters (1990), the Presidential Medal of Freedom (1992) and 13 Grammy Awards. In 2007, the United States Postal Service honored Fitzgerald with a postage stamp.

In her six decade long career, the Queen of Jazz recorded more than 200 albums and roughly 2,000 songs, making her the most recorded female – and the second most recorded – performer in history. Among those recordings are works with some of history’s greatest musicians and legendary songwriters.

Fitzgerald’s distinct style has influenced multiple generations of singers and her work transcends generations and musical genres. She had an extraordinary vocal range and flexibility and possessed a preternatural gift for pitch, rhythmic sense and flawless diction. Immensely versatile, she could sing it all from jazz and bebop to ballads, swing, pop and rock. With an unparalleled ability for mimicry and “scat” singing, Fitzgerald also produced melodic lines that put her in the category of great instrumental improvisers. Her voice was flexible, wide-ranging, accurate and ageless.

Fitzgerald performed her last concert at Carnegie Hall in 1991. She passed away due to complications from Diabetes, dying in her Beverly Hills home on June 15, 1996.

The Ella Fitzgerald Charitable Foundation was created and funded in 1993 by Ella Fitzgerald in order to fulfill her desires to use the fruits of her success to help people of all races, cultures and beliefs. Fitzgerald hoped to make their lives more rewarding, and she wanted to foster a love of reading, as well as a love of music. In addition, she hoped to provide assistance to the at-risk and disadvantaged members of our communities – assistance that would enable them to achieve a better quality of life. The Board of Directors of the Ella Fitzgerald Charitable Foundation seeks to continue Ella Fitzgerald’s goals by making charitable grants serving four major areas of interest: Creating educational and other opportunities for children; fostering a love and knowledge of music; including assistance to students of music the provision of health care; food, shelter and counseling to those in need and specific areas of medical care and research with an emphasis on Diabetes, vision problems and heart disease.

Ella Fitzgerald has passed away, but we remember her charity work.

Ella Fitzgerald has supported the following charities listed on this site:

Activity
Social reach
Google trends for "Ella Fitzgerald"
Available to Insiders only
Get Insider Access to these insights & more...

We don't have any videos related to Ella Fitzgerald.