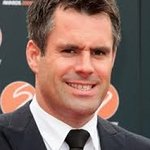 Kenny began his rugby career in his home town at Stirling County RFC. Having progressed through the ranks he made his senior debut at the tender age of 17 and went on to win the Scottish League Championship in 1995/1996. Having taken the decision to move to England, Kenny joined Wasps for whom he played with for eight seasons. Kenny contributed significantly to what was a very successful period for the London club, winning two league titles, two Tetley’s Bitter Cups and the Parker Pen Challenge Cup in 2002/03.

It was only a matter of time before Kenny was selected for Scotland and his international debut came at the age of 20 in 1992 versus Australia. Kenny was the first Stirling County player to win a cap. He went on to win 70 caps (13 tries, 34 conversions, 29 penalties) before running out in a Scotland shirt for the last time in the 2003 World Cup, again against Australia.

On the international stage, Kenny competed in three World Cups, and played a starring role in Scotland’s success in the 5 Nations Championship of 1999. His strong and powerful running saw Kenny regularly cross the line for club and country, in addition to amassing points through his trusty goal kicking.

Ahead of hanging up his boots, Kenny returned to Scotland to turn out for the Glasgow Warriors for a season. Kenny finally retired from professional rugby to pursue a variety of off field ventures and support his wife Gabby with their twins Reuben and Lois.

Kenny Logan has supported the following charities listed on this site:

Google trends for "Kenny Logan"
Available to Insiders only
Get Insider Access to these insights & more...

You can contact Kenny Logan using details from this service. (Or read our advice on how to contact celebrities)

Stars from the worlds of music, film, TV and business yesterday launched a campaign to save the Arctic. More →

We don't have any videos related to Kenny Logan.