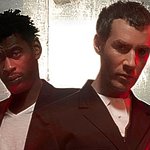 Music therapy charity Nordoff Robbins has revealed the final artists to be honoured at the prestigious O2 Silver Clef Awards, taking place in London on July 1.

“Throughout their career, Massive Attack have continually pushed the boundaries, exploring the incredible possibilities of music through pioneering experimentation, exceptional songwriting and a complete contempt for the restrictions of genre,” said Lucy Noble, Director of Events at The Royal Albert Hall, sponsors of the Best Group Award. “They are as exciting, dynamic and original as ever. We still have fond memories of their magnificent headline show in 1998 – a highlight of the band’s famous Mezzanine Tour – and are delighted to announce that they are the winners of this year’s Royal Albert Hall Best Group.”

Andrew Hozier-Byrne, better known as Hozier, is the award winning multi-platinum selling Irish singer who released hit single Take Me To Church in 2013 which became a global phenomenon. In 2015, the track was then nominated for Song of the Year at the 57th annual Grammy Awards and he performed Take Me To Church with Annie Lennox at the ceremony itself. He went onto win song of the year at the BBC awards and was also awarded the prestigious Ivor Novello award for song of the year, musically and lyrically, in the same year.

“I truly believe in the power of music to help and heal so I feel privileged and very happy to be presented with the Raymond Weil International Award by Nordoff Robbins,” said Hozier.

Craig Leach at RAYMOND WEIL sponsors of the International Awards adds, “Congratulations to Hozier for being presented this prestigious award. Since his arrival onto the music scene, his unique style of music has made him stand out and has brought him amazing success, while staying true to his own personal sound and style. We are very proud to be the longstanding sponsor of the International Artist Award, which each year recognises an international musician for the music contribution. Hozier joins a star-studded list of winners from previous years and rightly deserves this accolade. As a brand, the O2 Silver Clef Awards is something we always look forward to, celebrating the achievements of all the winners and the brilliant work of the charity on the day.”

Craig David first rose to fame in 1999 and has had 15 UK Top 10 singles and six UK Top 20 albums, selling over 15 million records worldwide as a solo artist. Craig David’s career has seen a revival in recent months, with his sights set on all the major UK and European festivals in 2016, including Glastonbury later this month.

“I’m really proud to accept this award from Nordoff Robbins who provide a fantastic and much needed service to those in need. I am really looking forward to being at the awards on the big day!” said Craig David.

The London Evening Standard Icon Award will be awarded to Jeff Lynne, founder of ELO. From 1972 to 1986, ELO has had twenty seven Jeff Lynne penned Top 40 songs on the UK Singles Chart, and fifteen Top 20 songs on the US Billboard Hot 100. Previous recipients of the Icon Award include Primal Scream and Fatboy Slim.

“I am thrilled to be receiving the Icon Award. There are so many people who benefit from the charity’s work and I am honoured to have been made part of it,” said Jeff Lynne.

Jon O’Donnell, Managing Director of ESI Media said: “ESI Media, home of the The London Evening Standard, is extremely proud of its continued association with Nordoff Robbins and all the fantastic work they do. This year we’re delighted to be presenting the Icon Award to a giant of the Music Industry on behalf of a giant hearted charity.”

Patti Smith is an American singer-songwriter, poet, and visual artist who became a highly influential component of the New York City punk rock movement with her 1975 debut album Horses. She co-wrote Because the Night with Bruce Springsteen which reached number 13 in the Billboard Hot 100 chart in 1978.

“I’m excited and thrilled to receive this award. I want to say a huge thank you to Nordoff Robbins for all the amazing work they do which makes an incredible difference to people’s lives,” said Patti Smith.

“We are honoured to be supporting Nordoff Robbins at this year’s O2 Silver Clef Awards, and a sincere congratulations to the amazing Patti Smith on winning Outstanding Achievement. We’re thrilled to be behind an award which is honouring someone who has made such an incredible contribution to music,” added Christophe Muller, Director of International Music Partnerships at Google Play and YouTube, on behalf of Google, which sponsors the Outstanding Achievement Award.

Since launching in 1976 the O2 Silver Clef Awards have raised more than £9million to fund Nordoff Robbins’ music therapy work.

“The O2 Silver Clef Awards are one of the reasons why Nordoff Robbins is able to continue delivering life-changing music therapy to so many vulnerable people,” said Nordoff Robbins CEO Julie Whelan. “For 41 years the event has been a key calendar date for us, celebrating the best in the music industry, whilst raising over £9 million for the charity. Our 2016 winners are all incredible acts and we are delighted to add them to our very deserving list of winners.”