Fleetwood Mac Honored As 2018 MusiCares Person Of The Year

Fleetwood Mac was honored as 2018 MusiCares Person of the Year on Friday, and the stars came out to celebrate.

The show featured an outstanding performance of Silver Springs by Lorde, as well as Miley Cyrus performing Landslide.

Proceeds from the annual Person of the Year gala — now in its 28th year — provide essential support for MusiCares, which ensures music people have a place to turn in times of financial, medical and personal need. 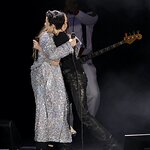