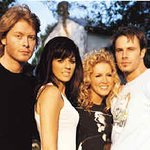 On April 18, the Recording Academy will celebrate 20 years of advocacy in Washington, D.C., by honoring Karen Fairchild, Kimberly Schlapman, Phillip Sweet, and Jimi Westbrook of three-time GRAMMY winners Little Big Town at the annual GRAMMYs on the Hill Awards.

Little Big Town’s contributions to the music industry align with some of the Recording Academy’s key advocacy and organizational causes, including advocating for music education and supporting MusiCares, a charity founded by the Academy that provides a safety net of support for the music community. The evening will also feature a performance by the band.

Uniting the worlds of music and politics, GRAMMYs on the Hill also recognizes legislators who have improved the environment for music by advocating for music creators’ rights. The 2018 congressional honorees are Rep. Judy Chu (D-Calif.), a long-time champion of music creators, and Rep. Doug Collins (R-Ga.), author of the songwriter-focused Music Modernization Act (H.R. 4706) and a senior member of the House Judiciary Committee. Chu and Collins also both serve as co-chairs of the Congressional Creative Rights Caucus.

“Little Big Town’s advocacy efforts, coupled with the legislative momentum on Capitol Hill to protect creators, further the Academy’s vision of a brighter future for music — something the Recording Academy has been championing since its inception, and made an even greater commitment to when it established its D.C. offices in 1998,” said Recording Academy President/CEO Neil Portnow. “We also are privileged to recognize the significant contributions of Reps. Chu and Collins, who have long supported the creative community’s right to be fairly compensated and to have meaningful copyright protections, advocating for the current comprehensive legislation, and supporting our continuing campaign for a terrestrial performance right.”

“We’re honored to stand alongside the Academy and Reps. Chu and Collins in speaking out and protecting an industry that has done so much for us,” said Sweet.

“Music is healing and powerful, and music education gives our children an outlet for expression that is absolutely necessary for their overall growth and well-being,” continued Fairchild. “We will continue to do our part to protect music education, songwriters, recordings, and the artists who bring them to life.”

The awards dinner and show will take place at the Hamilton Live in Washington, D.C., and will feature unique live performances and musical surprises. The GRAMMYs on the Hill Awards are sponsored by music rights organization SESAC Inc.

The following day, April 19, the Recording Academy will host the annual GRAMMYs on the Hill Advocacy Day, Capitol Hill’s largest and most prestigious legislative event for music creators. This year’s Advocacy Day will feature current and past GRAMMY winners and nominees, along with other esteemed industry leaders from across the country visiting with lawmakers to discuss important issues facing today’s music creators.

Key issues that will be discussed with members of Congress as a part of the Academy’s Advocacy Day include the need for comprehensive music legislation that benefits all creators — performers, songwriters, producers, and engineers — and brings copyright law into the 21st century. This would include recognizing producers as part of copyright law, setting market-based rate standards for songwriters and performers, and closing the pre-1972 loophole to ensure all artists are paid what they deserve, no matter when their music was created. The Recording Academy has worked tirelessly to gain support for comprehensive music copyright reform within the music industry and among legislators, testifying before the House Judiciary Committee in 2014 and calling for a music omnibus bill. The Academy is pleased that the House Judiciary Committee plans to markup a comprehensive bill the week preceding the event.

For more information about GRAMMYs on the Hill and to stay up-to-date on the latest Recording Academy advocacy efforts, visit www.grammy.com/advocacy.