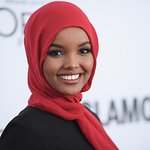 The announcement follows Aden’s travels with UNICEF and UNHCR to Kakuma, the refugee camp in Kenya where she was born. Aden was formally introduced to UNICEF USA via their partnership with Endeavor (formerly WME|IMG).

As a UNICEF Ambassador, Halima will use her voice to engage young people across the U.S. to support UNICEF’s mission to put children first. She will bring awareness to programs that save and protect children’s lives and use her platforms to advocate for children’s rights. As a refugee herself, she uniquely understands the needs, along with the hopes and dreams, of the 30 million children around the world who have been forcibly displaced by conflict.

“Partnering with UNICEF has been a lifelong dream and is my proudest accomplishment to-date,” said UNICEF Ambassador Halima Aden. “I’ve seen the organization’s incredible, impactful work for children first-hand. When I was young, UNICEF gave me an education, empowering myself, my family and our community in the process. It’s an honor to have this platform with UNICEF USA and I look forward to advocating for children around the world, just as others advocated for me.”

In September 2017, Aden traveled to Mexico with UNICEF NextGen to view UNICEF’s programs to support migrant and refugee children at the border of Guatemala and see ongoing recovery efforts from the 2017 earthquakes. In March 2018, Aden inspired students at UNICEF USA’s Annual Summit in Washington D.C. by speaking on the Women’s Empowerment and Leadership panel session.

This June, she joined TedX, UNHCR and UNICEF for the first-ever TedX conference from a refugee camp. Aden shared her personal story to thousands of refugees and emphasized, “Although the children here [in Kakuma] may be refugees, first and foremost they are children. They deserve every opportunity to flourish, to hope, to dream, to be successful.”

“To know Halima Aden is to know a fiercely passionate, intelligent and motivated young woman who pours her heart and soul into everything she does,” said Caryl M. Stern, President & CEO of UNICEF USA. “Her story is one of resilience and triumph and we are honored to officially welcome her to the UNICEF family where she will advocate on behalf of the world’s most vulnerable children.”

“In Halima’s first meeting with us, she shared a long-standing dream of returning to Kakuma to help those who are experiencing what she once did. We believe that by connecting clients within the Endeavor network like Halima to partners such as UNICEF USA, we can bring often-neglected stories to new audiences in ways that drive real action. Halima becoming a UNICEF Ambassador is a full-circle moment, and we could not be more proud of the journey she has already begun to embark upon,” said Tascha Rudder, Executive Director of the Endeavor Foundation.

As a UNICEF Ambassador, Aden joins a list celebrities who advocate for children’s rights on behalf of UNICEF including the late Audrey Hepburn, Selena Gomez, Pink, Alyssa Milano and Tea Leoni among others.

Aden was born in Kakuma refugee camp and lived there until the age of seven. She and her family then relocated to the United States where she became the first woman to compete in the Miss Minnesota USA pageant in a hijab. Following the pageant, she attracted national media attention and became the first hijab-wearing model to be signed with IMG Models. She has since appeared on the covers of BRITISH VOGUE, ALLURE and TEEN VOGUE, among others.