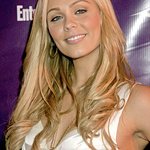 With her naked body painted to resemble a lizard’s skin, Canadian actor Laura Vandervoort—known for her roles on TV’s Smallville and V, among others—is the star of a brand-new PETA ad campaign exposing the cruelty of the exotic-skins industry that reads, “Whose skin are you in? Leave wildlife out of your wardrobe.”

The ad, shot by Nick Saglimbeni for SlickforceStudio, was revealed by Vandervoort in person during Toronto Fashion Week during the weekend.

“Three or four alligators have to die for one purse. They nail the snake’s head to a tree while it is still alive and peel its skin off,” said Vandervoort. “Because they are cold-blooded creatures, they take that much longer to die, so they suffer that much longer. … [Y]ou wouldn’t skin your dog to wear to an event, to go out on a date, just for a status symbol. So please, have some compassion for animals.”