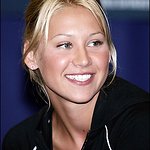 Here’s a chance for you and two friends to spend an hour on the tennis court in Miami with Anna Kournikova for charity.

The opportunity is being auctioned right now on CharityBuzz.com, and is part of the Chris Evert Pro-Celebrity Tennis Classic Fall Auction.

Chris retired from Professional Tennis in September 1989, after her final match in the U.S. Open. One month later, Chrissie was back on the tennis court hosting the first Chris Evert Pro-Celebrity Tennis Classic in Boca Raton, Florida.

The first fundraiser for Chris Evert Charities drew widespread attention in the international press. It was proclaimed the most successful, first-year benefit in tennis history. The 1989 event raised more than $350,000 before a sold-out crowd and a national television audience.

That inaugural event benefited a campus of drug treatment facilities in one of the poorest neighborhoods of South Florida. The treatment facility was built by The Drug Abuse Foundation of Palm Beach County offering treatment and prevention programs at all levels for troubled patients. The facility was built with virtually all labor and materials donated from the community, but with no funding for operations. With the funds provided by Chris Evert Charities, the facility was able to open its doors in early 1991 to fill an immediate need.

Chrissie met with Governor Martinez and HRS Secretary Greg Coler in Tallahassee. It was decided that other programs in the state could benefit from Evert’s superb fundraising abilities. She joined forces with The Ounce of Prevention Fund of Florida, a public/private partnership, established in 1988, with a similar vision as Chrissie’s.

The Ounce is committed to a proactive approach to the prevention of family and social problems such as substance abuse by pregnant and parenting women. With these forces united, they agreed to a new fund matching program with the state of Florida. Governor Martinez pledged to match, dollar for dollar, all funds that Chris Evert gave to The Ounce, automatically doubling Chris’ efforts for 1990 and all years following.

Also going under the hammer in this year’s auction are a tennis lesson with Stefanie Graf, a meet-and-greet with Maria Sharapova, and the chance to meet legendary musicians Sting, James Taylor, Rascal Flatts, Sara Evans, Vince Gill, and Toby Keith. Access the auctions here.

Acclaimed musicians, actors, business leaders, climate activists and environmentalists from around the world will unite on 21st June for Climate Action Live, an international event convened by Peace One Day. More →