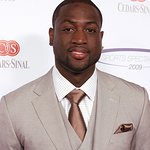 Known as D-Wade, Dwyane Wade is a professional basketball player for the Miami Heat.

In 2003, he founded The Wade’s World Foundation, which provides support to community-based organizations that promote education, health, and social skills for children in at-risk situations.

On December 24, 2008, Wade purchased a new home for a South Florida woman whose nephew accidentally burned down the family home.

In September 2009, Wade donated money from his foundation to keep the Robbins, Illinois public library from having to shut down.

Dwyane Wade has supported the following charities listed on this site:

Google trends for "Dwyane Wade"
Available to Insiders only
Get Insider Access to these insights & more...

You can contact Dwyane Wade using details from this service. (Or read our advice on how to contact celebrities)

We don't have any videos related to Dwyane Wade.