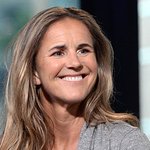 Chastain and Smoltz each took home $20,000 for their designated charities.

The winning duo, who shot a two-day total of six-under par, 138, overcame a difficult performance on the front nine to secure the title. Leading the tournament after day one by two strokes over eventual second-place finishers Roger Clemens and Ahmad Rashad (-1, 143), Chastain/Smoltz fell behind by one after eight holes.

The fan favorites were able to retake the lead after Clemens/Rashad double-bogeyed No. 13; their competitive nature took over later in the round when Smoltz sank an impressive, 20-foot putt for birdie on the 16th hole, clinching the victory.

“We play these tournaments for a good cause, but when we get out here on the course, we all are competitive and want to win,” said Smoltz while accepting the crystal trophy. When asked how it felt to win the tournament and to beat host Michael Jordan, Chastain responded with a wink, “It’s not about beating Michael.” Not taking the loss lightly, Jordan quipped that Chastain and Smoltz would not be partners next year.

Bringing additional fun and laughter to the four-day tournament, multi-talented actor and producer Ashton Kutcher brought his skills to the golf course, serving as Michael Jordan's caddy. Though Kutcher was clearly enjoying himself on the course, he also made sure to fulfill his caddy duties by pulling clubs, reading greens and providing words of encouragement to Jordan. He even occasionally threw grass in the air to gauge the wind direction, between signing autographs for fans and joking around with Aaron Rodgers, Brian Baumgartner and Dwight Freeney, who were part of the Jordan foursome.

Returning to Shadow Creek, MJCI marks only the second time the exclusive golf course has opened its doors to the public. Proceeds from the charitable tournament will benefit the Make-A-Wish Foundation, UC San Diego Nevada Cancer Institute, James R. Jordan Foundation, Opportunity Village and Cats Care, the NBA’s Charlotte Bobcats’ charity arm. Since its inception in 2001, MJCI has raised more than $6 million for charity.