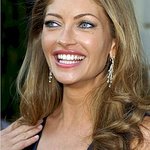 On Saturday May 31, stars converged at a private estate in Brentwood California to attend the 7th Annual Chrysalis Butterfly Ball. Each year, Chrysalis helps more than 2,300 men and women transition from poverty, regain their dignity, and radically change their lives through jobs. And the impressive celebrity turnout speaks volumes to the good work being done by Chrysalis.

Rebecca Gayheart-Dane and her ‘McSteamy’ husband Eric Dane were the first couple to arrive.

“I feel very honored to be part of Chrysalis and that I get to do the work that I do,” said Rebecca Gayheart-Dane before the event. “It’s a great cause and this community has been so supportive and I so appreciate it.”

Eric Dane was equally impressed with his wife’s work as a co-chair member: “Every year I marvel at the commitment and the dedication and the time she puts aside for this event,” he told the media.

Charlie Sheen and his new wife Brooke Mueller made their first public appearance as a married couple, just one day after the two exchanged vows in front of about 60 close friends and family. The “Two and a Half Men” star and real estate developer were engaged last summer after meeting at the Chrysalis Butterfly Ball in 2006.

“The charity is certainly worth while,” said Bateman from the red carpet. “I love this – instead of just throwing money at something, you actually give them a very proactive tool to eliminate their problem of homelessness.”

Chris Kattan was proud to play host for the evening, as he is a regular supporter of Chrysalis: “I think it’s a great cause to help the homeless situation here. I’ve been here four years in a row now.”

All proceeds from the Butterfly Ball directly fund Chrysalis employment programs, and this years’ event is said to have raised close to one million dollars for the organization.