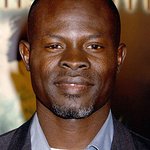 More than 325,000 people are estimated to have lost their lives because of armed violence since negotiations for the treaty were halted last year, and next week negotiators start anew in the hope of finally delivering an international treaty. Fresh from a trip to South Sudan where he saw first-hand the devastation that the poorly regulated weapons trade is having on families and communities, Hounsou arrived in Washington to make the case for Washington support.

“It felt like a Hollywood movie to see young boys carrying AK-47’s,” said Hounsou. “A strong Arms Trade Treaty would help restrict the flow of such weapons and bullets to countries like South Sudan. We all have a moral obligation to bring about a robust ATT and make the world a safer place.”

The proliferation of guns in South Sudan where war raged for nearly five decades has led the government to begin collecting guns from civilians. However, collection has only occurred in some areas and recently disarmed communities have fallen prey to heavily armed attackers. During the week-long trip, Hounsou visited the states of Warrap and Lakes where community members explained that the free flow of guns and ammunition have made the problem of inter-communal violence and cattle raiding worse.

“For many families in South Sudan, cows are like money in the bank,” said Hounsou. “While cattle theft has been going on for generations, today, with guns instead of spears, the conflicts have turned far deadlier.”

The United States has some of the strictest regulations when it comes to the export and import of weapons such as tanks, guns, missiles, ammunition and other arms, but many countries, such as South Sudan, don’t have any laws on arms imports at all. The Arms Trade Treaty would establish a global framework and bring the rest of the world more in line with the rigorous standards and regulations already in force in the United States.

“As the government of South Sudan continues with the disarmament process, the international community can help slow down the flow of weapons and ammunition into the country by agreeing to the global Arms Trade Treaty,” said Raymond C. Offenheiser, president of Oxfam America. “The Arms Trade Treaty would close the loopholes exploited by irresponsible arms dealers and help prevent regional and civil conflicts from spiraling out of control.”

Hounsou joined a number of other actors, musicians and directors in a letter to President Obama urging him to support the treaty.

“The world looks to the United States to lead on human rights. Now is the time for us to demonstrate that leadership by endorsing the Arms Trade Treaty,” stated the letter also signed by actors Kristin Davis, Rooney Mara Q’orianka Kilcher, and Tim Roth, musicians Jackson Browne and Angelique Kidjo and Russell Simmons, as well as director Ed Zwick and artist Yoko Ono. “As Americans of conscience, we have a responsibility to ensure that children and their families, wherever they are, can live free of violence.”

Four other letters from diverse constituencies, including a dozen retired generals, more than 500 legal professionals and scholars, and Nobel Peace Laureates, were also addressed to President Obama today, urging him to support a robust Arms Trade Treaty during this critical battle for responsible arms trade.

“As humanitarians and peacemakers, we cannot accept the deaths of hundreds of thousands of people around the world who are gunned down each year, with millions left maimed and traumatized,” stated the Nobel Peace Laureates letter signed by Oscar Arias, Desmond Tutu, Jimmy Carter, and Leymah Gbowee, among others. “The poorly regulated arms trade fuels conflict, violence, and serious violations of human rights, with devastating effects on health, security, and sustainable social and economic development.”