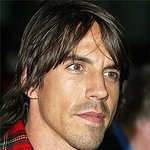 On March 7, Anthony Kiedis of the Red Hot Chili Peppers – along with other Hollywood stars – joined the 18th Annual Elton John AIDS Foundation Party at the Pacific Design Center in West Hollywood.

After dinner and cocktail hour, Grace Jones' predictably unpredictable performance added even more excitement and beauty to the event, which was produced by Virginia Fout of V Productions and designed with floral feeling by Antony Todd.

The Elton John AIDS Foundation (EJAF) was established in the United States in 1992 by Sir Elton John. The EJAF’s mission is to support innovative HIV prevention programs, efforts to eliminate stigma and discrimination associated with HIV/AIDS, and direct care and support services for people living with HIV/AIDS. It has raised over $175 million since inception in support of projects in 55 countries around the world, including significant funding dedicated to programs in their respective home countries.

EJAF-US awards grants to community-based projects in the Americas and the Caribbean. EJAF-UK focuses its grant-making on programs in Africa, Asia, and Europe. Click here for further information.