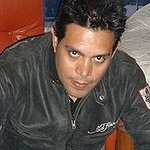 Starring alongside Damon Whitaker and Danny Venegas, Raul Julia-Levy has played the leads of a positive role model in film.

In real life, Julia-Levy plays the role of a philanthropist, actor, producer and activist with a heart. He grew up in a prominent family in Mexico City and met his famous father for the first time in Hollywood when he was 17. Despite any life challenges he has faced, he has remained dedicated to his passions and his cause.

I had the opportunity of meeting of Raul and asking him a few questions on why philanthropy is so important to him.

What initially inspired you to get involved in charity and philanthropy?

I have always had a heart for others since I was 5 years old. My instincts as a human being began at that time and I had a heart for people and animals. I remember my grandfather asked me, “who is the most important person,” and I said HE is, of course, or my mother. He told me he would be back after I could think about it a while. When he returned I told him that “I” am the most important person, and he kissed me and said that is right.

Were you raised to think about others or was there an event in your life that caused you to direct your interests toward charity?

At 7 years my grandfather told me that I have too many shoes – don’t you know there are people that don’t have one pair? A maid worked in the house and her son had holes in his shoes – I gave him 3 pairs of my shoes.

What do you get out of helping others and being a part of such a cause?

It makes me feel important to others and to myself and that I accomplish something – contributing to something important.

Why would you recommend others to get involved?

The rewards of helping others should be spread around and giving something back to the world in a noble way – it is a unique experience for humanity.

What would you like to see change about the world?

Everything needs to change in the world – starting from the respect of wild life and mankind as well as the respect for the environment around the world.

What would you do to fix the issues?

In order to make significant changes we all need to start from our own house and teach others to do the same.

You are involved with a lot of charities. What are the ones you are most passionate about and why?

I support FlauntMyPet, The Humane Society, the Make-A-Wish Foundation, Hollywood Children’s Hospital, and the Senior Citizen Foundation because they are all dedicated to supporting mankind as well as animals and survival into the future. I also support the Elton John AIDS Foundation, Children's Hospital Los Angeles, Michael J. Fox Foundation, & The Lolita Campaign.

Why do you feel these are worthy causes or organizations?

Life is essential for the growth of our planet and I believe these causes support that.

I have heard of the other charities, but I am not familiar with Flaunt My Pet. Could you tell me more?

When my first dog, Randy, died when both of us were 13 years old, it was a very emotional time for me. I felt like I lost a part of my body. Until this day his presence is still very strong to me. As an adult, my dog O’Toole died in 2006 – I was devastated. After spending $3000 we could not save him because he had plastic attached to his intestine. This is how FlauntMyPet.com was born. The death of our dog O’Toole and the astronomical number of dogs killed in this country each year-4 million dogs a year.

Flauntmypet.com is a major social site that will launch in 2009 showcasing a long list of Hollywood Celebrities and their pets. It is currently in the process of becoming a 501c3 nonprofit status. Their mission is to educate and bring the masses together so they can interact and be a part of a cause. For more information, email info@flauntmypet.com.

You and your celebrity friends have also been a great support to the Lolita Campaign. Can you tell our readers about your purpose in the campaign?

We are all dedicated to relocating this wonderful whale back into her natural habitat. It is extremely important that we succeed in this cause because that will set the standard and prevent aquariums and facilities, that don’t meet Federal regulations, from displaying such animals in captivity under poor conditions. We believe that we will succeed 100% in the relocation of the whale.

What other projects are you working on?

Working with AnswersForElders.com, a social site for baby boomers who are taking care of their elderly parents. I am currently involved with an epic movie called Birdwoman of the Snake, a Native American story about Sacagawea, staring Ewan McGregor

If you had the opportunity to use your celebrity status to make changes for the better of the world, what would you do?

Who are some of your celebrity friends that really make a difference in the world today?

How do you think we can get more celebrities to get involved in positive change?

By being a good example and promoting good examples and good work. Showing celebrities that their voices are powerful enough to make things happen.

How do you think we can inspire more people to become involved in giving back?

Utilizing our most powerful tool – our voices through a clear message that is direct and inspirational.

How important is it for celebrities like yourself and your friends to use their voice?

It is extremely important for them to give back in any way, shape or form – part of our mission. We all have a purpose to give back.

Imagine the impact we would see if everyone in Hollywood would use his or her voice to make a positive impact in the world. Who knows, maybe philanthropy would become the industry standard and we could all flaunt our pet with a purpose.