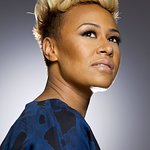 The Elton John AIDS Foundation (EJAF) announced today that it has selected soulful Scottish songstress Emeli Sandé to perform at this year’s Academy Awards Viewing Party to be held on Sunday, February 24, 2013, at West Hollywood Park.

This annual gala, sponsored by Chopard, Neuro Drinks and Wells Fargo, is the largest fund-raising event in Hollywood on Oscar night and has raised more than $34 million to support the Foundation’s mission to empower people infected, affected and at risk of HIV/AIDS.

“Emeli Sandé’s album, ‘Our Version of Events,’ is a true work of art and a favorite of mine,” said Founder Sir Elton John. “When she is on stage, you can feel her passion for music and the heart that goes into her lyrics. I can’t wait to introduce Emeli to my guests and experience her live performance together. I predict that by next year she will be a multi-Grammy Award winner.”

“I’m absolutely delighted to have the chance to work with Sir Elton again and to help support the amazing work he continues to do with his Foundation,” said Emeli Sandé. “I was lucky enough to perform at his Winter Ball recently and I’m sure this will be as memorable a night. I look forward to helping the Foundation raise funds and awareness for those touched by HIV/AIDS.”

In addition to Sandé’s performance, guests can look forward to an evening of fun that includes a dinner prepared by internationally renowned Chef Gordon Ramsay and a lively auction performed by Sotheby’s own Jamie Nivens. The event will play host to a myriad of Hollywood top names, many of whom are committed supporters of the Foundation’s work to provide services, including direct treatment and care for people living with HIV/AIDS in marginalized communities.

Audi, Grey Goose and MAC Viva Glam are the evening’s Co-Sponsors. The Foundation is especially grateful to the City of West Hollywood for its continued collaboration with EJAF. American Airlines is EJAF’s official sponsoring airline.