Look To The Stars was proud to be part of the inaugural Noble Awards on Sunday, October 18 – an event that honored a host of charities and the celebrities that support them, elevating awareness of the significant impact of their work.

Lionel Richie was on hand during the ceremony to present an award to Joel Madden, who attended the event with Nicole Richie and his brother Benji.

“I want to welcome him to our family and present this Noble award to a guy I love very much – Joel Madden!” said Lionel as he introduced Joel to the crowd.

“They are just as much a part of it,” said Madden, paying tribute to Nicole and Benji. “Nicole does just as much as I do with Art of Elysium and all the charities we work with. And so does Benj – Benj actually does more then I do, and he plays the guitar better then I do, so he is a little more entertaining for the kids.”

Madden later Twittered about the emotions he felt as he accepted his award: “Just left the NOBLE awards. Got an award that was really for the people at the Art of Elysium. Awesome folks and I’m humbled to know them. By the way got totally choked up when I got my award. I hate thinking about kids in the hospital, they should be getting the awards not us.”

The award itself was designed by Antonio Banderas, with personal touches added by children who participated in The Art of Elysium workshop at the Shriners Hospitals for Children.

“I think so often we don’t know that our gestures matter,” said Teri Hatcher, who was also honored. “I think when you get involved in your local community charity you really do see you make a difference and it’s empowering for you.”

Look To The Stars was at the awards, and we will bring you more about the fantastic event over the coming days. 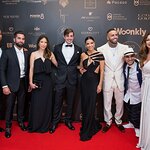