Look To The Stars Is Feeling Inspired 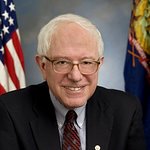 At Look To The Stars, we strive to honor all of the great things people are doing, focusing on the positive contributions people are making in the world today, and understanding that no one is perfect.

As part of that, over the 9 years that we have been running this site, we have resisted sharing our own thoughts as to which politicians we support. It was more important for us to reach out and show the great things that everyone was doing, shining the spotlight on the causes we care about.

However, this year there is a candidate who resonates so deeply with what we at Look To The Stars care about that we feel compelled to speak out and publicly support him. That candidate is Bernie Sanders.

We like what Bernie stands for, and we admire the strong stance he has held throughout his life in his fight for equality. Whether it be racial equality, economic equality, or gay rights, women’s rights, or voting rights, he has been staunchly putting himself out there, fighting for the underdog throughout his long career in politics, and we love that.

On top of this, his desire to deal with climate change and avoid unnecessary wars energizes us to work harder to do our part on a local and global scale. We find Bernie inspiring, and we aren’t the only ones.

For the first time in 25 years, the United States’ largest peace and disarmament organization, Peace Action, has endorsed a candidate: Bernie Sanders. The political advocacy non-profit MoveOn, Friends of the Earth, Americans for Democratic Action, Harvey Milk LGBT Democratic Club and Democracy for America are among the many other organizations supporting him.

Having attended one of Bernie’s rallies, we were overwhelmed by the energy and willingness of the people in attendance to try harder and to do more to make a difference. Thousands of us were out there, willing and excited to work to make things better; we had just been missing a cohesiveness that comes from having a focus and being organized. Bernie is giving Americans the focus that is needed to make life better for everyone.

We encourage you to go out and vote this year – in the primaries if you have that opportunity coming up, and in the elections coming up in November. We don’t insist that you vote for Bernie – we want you to vote according to your own hopes and desires, but please do get out there and show that you are concerned about your country and where it is going. The United States’ actions and policies affect the entire planet; the world is watching, and it needs you to care.

A final note: Please check your voter registration information. Check it early and often, as there have been reports of people’s registration being switched, leading them to have trouble when they arrive to cast their votes.