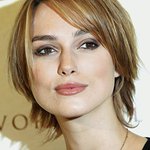 With Valentine’s Day fast approaching, it is time to think about loving gifts that rise above the standard red roses. And there are a number of products available this month that not only tell that special person how much you care, but also help raise money for those who are less fortunate. Shoes, dresses, T-shirts, and even a second-hand swimsuit are on offer to help Cupid’s arrow hit its mark.

Actress Keira Knightley's latest movie, Atonement, has recently received seven Oscar nominations, including Best Picture, and now fans have the chance to buy a very special part of the production. The dazzling green dress Knightley wore in the emotionally charged romantic scenes opposite James McAvoy is being auctioned by the Clothes Off Our Back Foundation to benefit Variety - The Children's Charity.

The dress is one of several made for the scene, and was designed by Jacqueline Durran, who has been nominated for a Costume Design Academy Award for her work on the film. The auction runs from February 1 until March 1 at www.clothesoffourback.org, and bids have already reached $3,000.

Clothes Off Our Back is also selling a series of outfits donated by some of Hollywood’s most beautiful woman. The Little Black Dress Auction runs until March 13, and features dresses from the closets of Julianne Moore, Felicity Huffman, Mena Suvari, Gabrielle Union, and Jaime Pressley. Beneficiaries include Feeding America, The Art of Elysium, World Education, and autism research.

If it is shoes you are after, look no further than the Spirit of Women Health Network's Celebrity Red Shoe Auction. The auction is being run on eBay from February 5-14, and features footwear autographed by celebrities such as Felicity Huffman, Marcia Cross, Rachael Ray, LeAnn Rimes, Alanis Morissette, and Dancing With The Stars’ Carrie Ann Inaba.

“This February, we hope to encourage women to take action for their heart health by dancing and exercising, discussing their health with their physicians, and helping to support women’s heart health research and education,” said Josh Davis, President of the Spirit of Women Health Network.

The auction is part of the Red Shoe Initiative, a national health education and action campaign that aims to encourage women to be aware of their heart health. As with past shoe auctions, proceeds will benefit several charities, including the National Stroke Association and the Peripheral Arterial Disease Coalition.

The auction will also precede Spirit of Women’s Day of Dance, an event that will involve dance and health screenings around the US on February 23.

Another gift idea this Valentine’s Day is the new charity T-shirt from designer Marc Jacobs – featuring a naked Victoria Beckham.

The T-shirt has been designed to raise awareness of the Interdisciplinary Melanoma Cooperative Group, an initiative with aspirations almost as big as their name. The program was established by Jacobs’ business partner, Robert Duffy, to raise consciousness of one of the most common types of cancer in the world – over 160,000 new cases of skin cancer are diagnosed every year, with around 48,000 deaths.

“Since we moved to California, I have realized how important it is to practice safe sun for myself, and to keep my three boys skin well protected as well,” said Beckham. “Skin cancer is a huge problem, and I really wanted to help raise awareness by taking part in Marc’s initiative.”

The T-shirts are available at Marc Jacobs’ stores in America, Europe, the Middle East, and Asia for $35, and even Victoria’s husband David has been seen sporting one recently, at the opening of the David Beckham World of Sport in Brazil.

Finally this month, if you are looking for something really special to give your loved one this Valentine’s Day, why not buy Nicole Kidman's old swimsuit – it is to be auctioned in Sweden to raise funds for poor families in India.

The story behind the swimsuit is long and twisty. Kidman visited Sweden six years ago to film Dogville, and hired a private pool while there. However, she left her black one-piece swimming costume in the changing rooms when she went home. Attempts to return it failed, and it was donated to a cancer charity, where it raised $4,700 at auction. It was later donated to the Salvation Army, where it was auctioned for a further $865.

A new auction will raise funds for Erikshjalpen, a charity that aims to buy cows in India with money raised.

The swimsuit is framed and is expected to raise $1,500.

Entrepreneur Tony Robbins, a bestselling author, philanthropist and the world’s #1 life and business strategist, together with Feeding America, the largest domestic hunger-relief organization in the United States, today announced that they are closer than ever to their multi-year goal of helping provide 1 billion meals to people experiencing food insecurity. More →