FilmAid International is a non-profit humanitarian aid organization that leverages the power of film to help people in need throughout the world.

FilmAid works in communities that lack a solid communications infrastructure and that have a need for information, inspiration, or both. We work in refugee camps, urban slums, disaster zones, and other communities in crisis.

Individuals can make a direct donation to FilmAid. Supporters can also sponsor a fundraiser or movie screening to benefit FilmAid. Other organizations interested in using film to help communities in need can contact FilmAid to discuss developing a partnership program. Broadly, we seek programs that address any of the following issues:

FilmAid International has received support from the following celebrities listed on this site:

Activity
Social reach
Google trends for "FilmAid International"
Available to Insiders only
Get Insider Access to these insights & more... 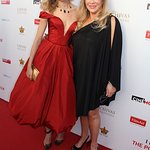 The roof was well and truly raised at the Plage Royale private members’ club in Cannes this week, when over 300 guests joined three powerful and philanthropic women — Supermodel Natalia Vodianova, Caroline Baron and Daphna Ziman – at the inaugural Beach Ball Gala in support of Naked Heart Foundation and FilmAid International. More →

We don't have any videos related to FilmAid International.