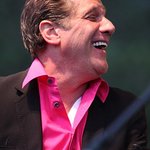 Glenn Frey of the Eagles, one of the world’s most successful rock bands having sold more than 120 million albums, will headline the entertainment at Celebrity Fight Night XVI on Saturday, March 20th at the JW Marriott Desert Ridge Resort & Spa in Phoenix, AZ.

Celebrating his 50th year on the world stage, Muhammad Ali will receive a special introduction from Grammy Award-winning producer and American Idol judge, Randy Jackson during the event.

Joseph Cinque along with the American Academy of Hospitality Sciences will present “The Dinner of the Century” created with the unparalleled direction of the most celebrated chef and only Six Star chef in the world, Jean-Georges Vongerichten. For the latest news, visit the newly unveiled website at celebrityfightnight.org or facebook.com/celebrityfightnight.

Celebrity Fight Night Foundation is a nonprofit organization that was founded in 1994 by Jimmy Walker to support the Muhammad Ali Parkinson Center at Barrow Neurological Institute in Phoenix, as well as numerous other charities. Sponsoring this year’s event are CA, Climatec, US Airways, Casino Arizona, Federal Express and Flight Options. For more information, visit www.celebrityfightnight.org or www.facebook.com/celebrityfightnight.