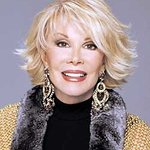 An entertainment legend of unparalleled talent, Joan Rivers was the first woman to break the glass ceiling of Late Night Television. After she was chosen to be the only permanent guest host on “The Tonight Show” for 3 years, she then went on to become the first woman ever to host her own late night talk show – “The Late Show Starring Joan Rivers” on the Fox Network.

After creating and hosting Live from the Red Carpet for the E! Network (1996-2004), Joan returned to anchor their popular and successful franchise Fashion Police, hosting both its hour-long weekly broadcasts and its awards-season specials.

Joan was also a vastly accomplished author, and her 11th book, I Hate Everyone….Starting With Me, was published by the Penguin Group in June 2012. It instantly became a New York Times Bestseller. Prior to that, she wrote the other bestselling titles, Men Are Stupid and They Like Big Boobs: A Woman’s Guide to Beauty Through Plastic Surgery and Murder at the Academy Awards: A Red Carpet Murder Mystery, both published by Simon & Schuster.

In 2012, Joan recorded her live concert performance at the Arcada Theatre in St. Charles, Illinois for a comedy special entitled Don’t Start with Me, which premiered on Showtime in November and was released on DVD and iTunes in January 2013.

Joan Rivers was a true pioneer: She created her own brand of irreverent, unconventional comedy and forged her own remarkable rise to stardom in the entertainment world. Enduring tawdry clubs, Borscht Belt showrooms, and grimy Greenwich Village cabarets, her career skyrocketed in 1968 when she appeared on The Tonight Show Starring Johnny Carson. Within three years she was hosting That Show with Joan Rivers, one of the first syndicated daytime talk shows on the air. She soon made television history as the permanent guest host of The Tonight Show and helped launch the nascent Fox Network in 1986 with The Late Show Starring Joan Rivers. In 1989, Joan triumphantly returned to daytime TV with The Joan Rivers Show, winning an Emmy Award for Outstanding Talk Show Host.

Despite being constantly in motion, Joan continued to work tirelessly on behalf of charities that are close to her heart: God's Love We Deliver, The American Foundation for Suicide Prevention and Guide Dogs for the Blind. She also dedicated her time to the National Osteoporosis Foundation and Wounded Warriors, among other remarkable organizations.

Joan Rivers has passed away, but we remember her charity work.

Joan Rivers has supported the following charities listed on this site:

Google trends for "Joan Rivers"
Available to Insiders only
Get Insider Access to these insights & more... 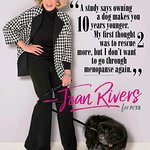 Joan Rivers, who would have turned 84 on June 8, lives on — in new books, on QVC, and now in a PETA campaign urging animal adoption, using one of her trademark jokes. More →

Items From Joan Rivers' Country Estate And Manhattan Apartment To Go Under The Hammer Jul 12, 2016

Beloved comedian, philanthropist, designer and global businesswoman Joan Rivers was known for her exquisite taste in fashion and interior decor. As the recent, highly successful Christie’s estate auction of her fine and decorative art collection revealed, Rivers appreciated quality and consistently bought the best of every category. More →
More news about Joan Rivers →

We don't have any videos related to Joan Rivers.