McCarthy supports Austism-related causes, and wrote “Louder Than Words” based on her experiences with her own autistic son.

“Who’s afraid of the truth? Usually the people it would hurt the most.” – Jenny McCarthy

Author, Model, Comedienne, Actress, and Autism Activist, Jenny McCarthy gets to the truth and is not afraid to say it how it is. She encourages everyone to wear the bracelet from Until There's a Cure, a national organization dedicated to eradicating HIV/AIDS by raising awareness and funds to combat this pandemic. But nothing brings the fight closer to home than the issue of autism activism and her son Evan, who was diagnosed with autism in 2005.

McCarthy supports The HEAL Foundation dedicated to assisting individuals with Autism Spectrum Disorders, which now affects 1 in 91 children today. HEAL has raised more than $1 million to serve the hundreds of local families and individuals affected by Autism. McCarthy served as spokesperson at fundraisers, online chats, and other activities from June 2007 until October 2008 for Talk About Curing Autism, a not-for-profit organization focused on supporting the autism community by connecting people, providing information, resources, and support to families affected by autism.

She is a prominent spokesperson and activist for the Jenny McCarthy and Jim Carrey Autism Organization – Generation Rescue. As board members, activists, and parents, McCarthy and Carrey work with an international movement of scientists, physicians and more than 1200 volunteers researching the causes and treatments for autism and helping more than 20,000 children begin biomedical treatment.

McCarthy has published a number of books on the subject including, Louder than Words A Mother’s Journey in Healing Autism (2007), Mother Warriors: A Nation of Parents Healing Autism Against All Odds (2008), and Healing and Preventing Autism Co-written with Dr. Jerry Kartzinel (2009).

Jenny McCarthy has supported the following charities listed on this site:

Google trends for "Jenny McCarthy"
Available to Insiders only
Get Insider Access to these insights & more...

You can contact Jenny McCarthy using details from this service. (Or read our advice on how to contact celebrities)

BTIG announced today that it plans to donate more than $5 million to hundreds of charities as a result of its annual BTIG Charity Day. More →

BTIG, LLC has announced the list of celebrity guest traders for its 16th BTIG Commissions for Charity Day on Tuesday, May 8, 2018. More → 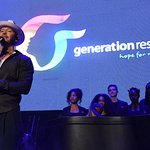 We don't have any videos related to Jenny McCarthy.

This book tells of Jenny McCarthy’s son’s struggle with autism, how it affected their family, and their mission to find a cure.