Imagine being unable to engage with the world or express your feelings to anyone, despite possessing a sound mind. Imagine being aware of everything around you, yet incapable of communicating your thoughts and feelings. For many people with autism, this is an everyday reality. Now imagine being able to overcome these obstacles and achieving what was once considered impossible.

The Foundation is the inspiration of one mother’s efforts to help another. When Kate Winslet narrated A Mother’s Courage: Talking Back to Autism, a documentary about a young Icelandic boy named Keli living with autism, the Oscar-winning actress and mother of two became inspired to make a difference.

After meeting Keli’s mother Margret, Kate was deeply touched by Margret’s far-reaching journey to find a way for her nonverbal son to learn to communicate. And with that, the idea for the Golden Hat Foundation was born. The Foundation’s name comes from one of the first poems Keli wrote (using his letterboard), entitled “The Golden Hat”.

Kate describes her motivation to get involved:

“After watching A Mother’s Courage: Talking Back to Autism with my daughter, she turned to me and asked, “What if I wasn’t able to talk to you mummy?” As I thought about what that meant, for a mother not to be able to talk with her own child, I realized that I had to lend my voice to raise awareness of this rapidly increasing disorder. As a mother of two, I thought, how could I not help tell this story of a mother’s journey to discover her son; a film full of courage and a determination to try to change the world for children with autism. I am incredibly proud to be involved on this journey to help give people with autism a voice. Together, with your support, we can reduce the impact of this debilitating disorder."

Golden Hat Foundation has received support from the following celebrities listed on this site:

Activity
Social reach
Google trends for "Golden Hat Foundation"
Available to Insiders only
Get Insider Access to these insights & more...

Kate Winslet To Be Honored With Actors Inspiration Award Sep 19, 2017

The SAG-AFTRA Foundation has announced it will bestow its Actors Inspiration Award to critically-acclaimed actress and philanthropist Kate Winslet, highlighting her career achievements and honoring her charitable work. More → 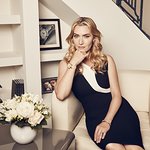 In its boutique located at Faubourg Saint-Honoré in Paris last week, the Swiss watchmaker Longines, with the participation of its Ambassador of Elegance Kate Winslet, presented the Flagship Heritage by Kate Winslet watch. More →

We don't have any videos related to Golden Hat Foundation.

The Golden Hat: Talking Back to Autism

This book by Kate Winslet benefits her autism charity, the Golden Hat Foundation, and features photographs of her celebrity friends.