In 2008, Zachary Levi donated a T-shirt to an auction for the Tuberous Sclerosis Alliance.

Zachary Levi’s generosity and support has made an incredible impact for Operation Smile. His efforts have helped raise funds for more than 1,000 surgeries, giving children worldwide new hope.

Zac is the star of NBC’s hit TV show Chuck, as well as the new animated Disney film, Tangled. He also appeared in Alvin and the Chipmunks: The Squeakquel and worked alongside Sara Rue and Sherri Shepherd in ABC’s Less Than Perfect. Zac began his acting career in regional theatre, starring in plays such as Big River and Godspell.

As a supporter of Operation Smile for many years, Zac uses his wide array of talents to help fund reconstructive surgeries for children born with cleft lips and cleft palates worldwide. In 2010, Zac donated his $15,000 prize to Operation Smile after winning the Pole Position at the Toyota Pro/Celebrity Race. Recently for his 30th birthday on September 29, Levi asked for donations to Operation Smile in lieu of gifts.

As of July 2015 Levi has raised upwards of $795,000.00 for Operation Smile and has set the goal of raising $240,000.00 per Comic Con convention through Nerd HQ, a sanctuary he created for like minded individuals to meet and socialize.

“There are so many children around the world who so desperately need our help,” Levi said. “I am personally committed to helping give them new smiles and to make sure their voices are heard. I am proud to be a Smile Ambassador for Operation Smile, and to know that I am making a difference in the lives of these children.”

Zachary Levi has supported the following charities listed on this site:

Google trends for "Zachary Levi"
Available to Insiders only
Get Insider Access to these insights & more...

You can contact Zachary Levi using details from this service. (Or read our advice on how to contact celebrities) 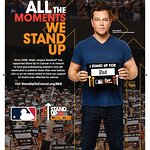