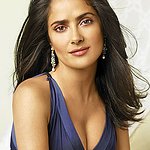 Mexican actress Salma Hayek is highly active in raising awareness about violence against women and discrimination against immigrants, and since the birth of her daughter last year, has added campaigns helping children to her list of charity works.

Her own charity, the Salma Hayek Foundation, which previously supported organizations giving aid to and raising awareness for battered women, has now branched out to work with disadvantaged children on the streets of Mexico, helping them to overcome problems such as drugs, violence or lack of education.

As a spokesperson for the Pampers 1 Pack = 1 Vaccine campaign, she helps raise awareness and funds which allow UNICEF to provide tetanus vaccines to pregnant women, protecting the women for up to 15 years, and their babies for several months after the birth.

She says of the program:

“I have long been a supporter of every child’s right to health and happiness. As a new mother, I’m thrilled to help Pampers and UNICEF raise awareness of their initiative to provide tetanus vaccines to those at risk.”

Hayek took part in the America: A Tribute to Heroes charity telethon for victims of 9/11.

Hayek breastfed a desperate mother’s hungry baby during a fact-finding trip to Sierra Leone, Africa, in 2008.

Salma received the Cookie magazine “Smart Cookie” award in 2009 for her active participation in charity since entering the realm of motherhood.

Salma Hayek has supported the following charities listed on this site:

Google trends for "Salma Hayek"
Available to Insiders only
Get Insider Access to these insights & more...

You can contact Salma Hayek using details from this service. (Or read our advice on how to contact celebrities)

Six of the world’s biggest Spanish-speaking celebrities star in a new ad to bring attention to laws that require voters in 16 states – including the important swing state of Pennsylvania -to insert their mail-in ballot into two separate envelopes in order to be counted. More →
More news about Salma Hayek →